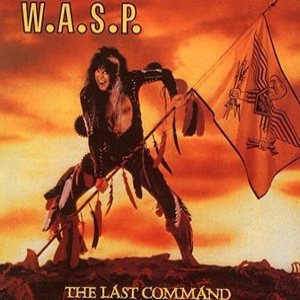 W.A.S.P is one of the members of the Un-Holy Trinity of Glam Metal bands on the Sunset Strip in the early 80’s (along with compatriots Motley Crue and Ratt). Nikki Sixx and Blackie Lawless were actually in the same band in the late 70’s, Sister. (This band was NOT Twisted though). Nikki noted that he and Blackie were both natural-born leaders and while they remained friends one band was not big enough for both their ego’s. Blackie Lawless is the undisputed leader of W.A.S.P. as the band currently tours, but none of the original members are in the band save for him. Blackie sought to fashion a band that incorporated the elements of shock rock (Alice Cooper, KISS) with heavy metal music (Sabbath, Priest) leading W.A.S.P. to being one of the heaviest acts on the Strip. However, they never sacrificed catchiness and hooks for heaviness like a Dokken and that is why I am more of a fan of Blackies and the boys.
Blackie starts off their sophomore offering, The Last Command, with a total burner and one of their most well-known songs, Wild Child. It displays W.A.S.P. at their finest both visually and sonically. The galloping rhythm section abounds with guitar and drum fills as Blackie utilized his powerful voice to scream about a woman that leaves her man time after time to be with self-proclaimed “Wild Child”. Holmes’ guitar tone is among my favorite in glam metal as it sounds like metal being twisted and bent to his will. The solo is unique as it is more of a ambient, atmospheric piece setting the mood of sexual danger before Blackie burst back into the high-energy chorus. The music video kicks all kind of ass and it was a total favorite whenever it came on Metal Mania (the late night version of Headbanger’s Ball on VH1Classic). It displays the band riding motorcycles in the desert only to begin performing a shock rock show in the middle of the desert. Stever Riley’s most excellent posture is on display as is Blackie’s other-worldly features. Blackie just doesn’t look human. I am not talking the tassels and the buzzsaws attached to his forearms. The make-up, his hair and facial features make him look like a demonic baron of Hell, which is TOTALLY FUCKIN BITCHIN!!! I love me some Blackie Lawless. Fun Fact: W.A.S.P. is my mother’s favorite glam metal band. She doesn’t realize it because she keeps thinking it is Motley Crue or Twisted Sister when it is their songs, but it is the W.A.S.P. songs she likes most.
Next up, Ballcrusher, is a real piece of heavy metal thunder with a huge fuckin riff that just rains down on you. Blackie is at his lyrical best as he describes this “Lesbo-nymphomaniac, ohhh she had a girlfriend at 17” and “She says AC, I say DC, the damn bitch is just too bizarre.” (AC/DC is a reference to bisexuality, I don’t know what this says about the street-tough Aussies in AC/DC). The chorus is the fist-pumping, “Bye, bye, bye Ballcrusher, Bye, Bye, Bye!” The song is ridiculously catchy, which proves that you can have a HEAVY, tough song and still make it catchy.
For the next choice cut off the album we go to the bottom-heavy (the Kimmy K of metal songs) in the form of Jack Action. What looks less human, Blackie's face or Kimmy K's ass?

Starting off the ever-present cowbell (the cowbell was all over early 80’s metal albums) the song burst into a chugging bass groove with Blackie looking for Jack Action because he has a score to settle. Jack Action better be a bad, bad man because with Blackie on his tail I would say his days are definitely numbered.
Wrapping up side one is the haunting Widowmaker, which is a very dark POWER ballad (this is one tough, heavy ballad). Blackie described himself as some sort of Horseman of the Apocalypse riding out in the Wild West and reigning down hellfire and destruction wherever he passes. Definitely a song to check out because it illustrates how power ballads do NOT always haven’t be sappy tear-jerkers, but can be dark and sinister. Guess which version I prefer. HAIL SATAN!
“Hey dude, let’s party” this spoken word section in the middle of Blind In Texas tells us we have left the dark lands of doom for the more conventional glam metal scene of the bar. This is a great party song with a pretty hilarious spoken word section that would make Diamond Dave proud as Blackie bemoans the fact that the bar is out of alcohol and that he is stuck in Texas.
This review ends with the title track, which is a great heavy metal anthem that plays to W.A.S.P’s strengths with a KISS-like lead guitar riff and Blackie shouting for us all to “Stand up and scream WOAH!” Remember my general rule if the song has WOAH in it and it bound NOT to suck. Seriously, WOAH is just a fun word to say. Say it with me now, WOOAAAAHHHH, we are half-way there, whoops, I did not just start singing Bon Jovi. Ermmmm, I mean, HAIL SATAN!
We will be seeing more of W.A.S.P. later in this countdown as they were truly seminal bands in the nascent glam metal scene of the early 1980’s. Their music is just fun, heavy songs with tons of hooks, catchy lyrics and bitchin guitar solos. This also the band that sounds most closely related to early Motley Crue and other 1980’s heavy metal bands. W.A.S.P. has less in common with your Poison’s and Warrant’s and more in common with Quiet Riot and Judas Priest. As I stated early, Blackie is still active with W.A.S.P. and they released a record in 2009 dubbed Babylon and are planning a 30th anniversary tour next year. This is definitely one of the lost bands of the 80’s and I hope I am getting the word out about totally radical, killer bands such as these.  Here is SEX DRIVE! I am talking about SEX DRIVE!
Posted by Martin Boulevard at 4:38 PM