ROCKTOBERFEST: A Most Excellent Countdown of the 31 Most Bitchin Glam Metal Albums
#21 Crashdiet – Rest In Sleaze (Released 2005) #12 Swedish Albums Chart 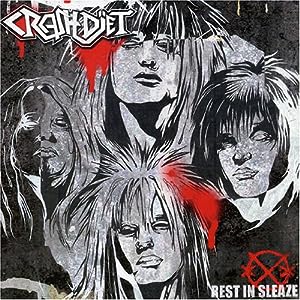 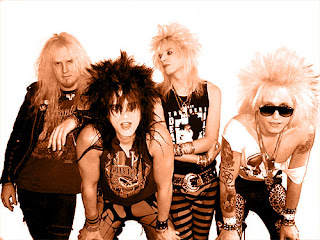 Crashdiet is our first repeat performer as the band checked in at #27 with their latest offering, Generation Wild. The debut album by  these “eristic prophets” (their words not mine and remember English is their second language), Rest In Sleaze, the first major glam release of the 21st century, kickstarted the New Wave of Swedish Sleaze movement. The movement has grown to include bands such as Hardcore Superstar (who changed their sound to match a more G’N’R feel in 2005), Crazy Lixx, Vains of Jenna and Reckless Love and enjoys a quite bit of popularity in Scandinavia. There you go all ye nay-sayers and non-believers, glam metal is NOT dead it has just been transported to the cold, but welcoming bosom of Sweden. However, there was a major set-back for the Motley Crue of Sweden, as Dave Lepard committed suicide in 2006.  Now of course, we all know Crashdiet has pressed on and continues to be the premiere sleaze band out of Sweden, but one has to wonder what could have been with the original quartet. He did leave behind a legacy of one of the best glam-sleaze albums of all time and being the spark for the New Wave of Swedish Sleaze Metal.

The album kicks off with the second single, Knokk Em Down, one scream from Dave and the thunderous riff from Martin we know that we are in for one helluva ride. The gang-vocals are present almost immediately and Dave displays his best attribute and that is his infectious, hard-hitting attitude.  The best part of the song is easily the solo as it one of Sweet’s most shred-tastic solos and will melt your face.
The lead single, Riot In Everyone, follows and it is my second favorite Crashdiet song. The song is one of the best anthems of the 21st century or any century for that matter with a headbang-inducing, rumbling rhythm section. The chorus is infectious with Lepard and the backing vocals expounding the new sleaze manifesto of inner strength and individuality. The music videos of Crashdiet are in deep contrast to the pop-friendly, bright technicolored 80’s music videos. They focus on high contrast black & white cinematography with dark imagery that reflects the seedy, shady underbelly of the streets that lends itself to a much edgier feel.
The next song was not released as a single much to my chagrin, Queen Obscene (69 Shots), as it is my absolute favorite Crashdiet song and is one of my favorite songs period. Full Stop. The chorus is highly infectious that will be stuck in your heads for days as the layered, harmonized gang-vocals always have me signing along. This would have been a huge party hit back in 1986 as everybody was on the prowl for a “sex punk love machine”. I think we all know my Queen Obscene is. Just like Rex Ryan, I am challenging all the women to step up their game and try to de-throne Ke$ha from her rightful position upon the throne as Queen Obscene.
Next up is the single, Breakin The Chainz, which features a bottom-heavy rhythm section that drives the anger and passion of this song. Lepard howls about the chains of conformity and the fetters of societal conventions. The solo captures Sweet at his melodic best with a guitar tone that would make Holmes of W.A.S.P. jealous. The video features the black & white color scheme and relates the lyrics most specifically to that of corporate monotony. The band begins in their corporate attire before transforming into their wildside costumes of leather, make-up and wild hair.
The final song for this review is the power ballad, It’s A Miracle. Remember the biggest qualm I had with Generation Wild were the sub-par power ballads, well that is not an issue on this album. It’s A     Miracle  is a powerful love song about a man that has fallen for a confused, indecisive woman (Make up yer mind, woman). Lepard’s vocals lend themselves better to power ballads than Simmie’s powerful, but bereft of heartfelt emoition vocals. The song begins with a pounding bassline until the guitar screeches in and we are off the journey of a very powerful and catchy ballad.
This wraps up the 21st century as the rest of the albums will be drawn from the golden era of the 1980’s. One of my hopes by doing this blog was to raise awareness of the Swedish Sleaze movement. Glam metal is very much alive and banging (chicks).
Rest in Sleaze, Dave.
Posted by Martin Boulevard at 11:08 AM