ROCKTOBERFEST: A Most Excellent Countdown of the 31 Most Bicthin Glam Metal Albums Rachel Bolan (I am compensating with this nose chain) – Bass

Rob Affuso (One night aint enough of his love) – Drums 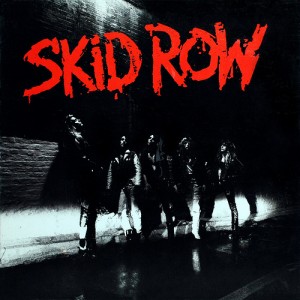 The debut album from these East Coast rockers, Skid Row, is the youngest album to crack the top 10 being dropped on the masses in 1989. It features the vocal prowess and range of Sebastian Bach. Don’t let his pretty boy looks and long blonde locks fool ya, this right here is a one tough muthafucka that belt out a power ballad as well as he can sneer through a sleezy steamer. Skid Row imparts an East Coast toughness on this album, which can be derived from the New York/DC punk scenes. Hill/The Snake are not most technically proficient guitar tandem, but they get the job done with buzzsaw riffs and short, melodic solos.

What differentiates this band from the other millions of clone glam milieu in 1980s is the raw, unadulterated talent of Sebastian Bach and the aggressive metallic sound. In the only other “legitimate” countdown I could find for a Best Glam Metal albums of all-time, Skid Row’s debut took the top spot. This is what metal-rules.com had to say,

Here is the link to their clearly inferior countdown: http://www.metal-rules.com/polls/index.php?id=8

“With their very first release from 1989, Skid Row turned heads. From out of the blue, this Jersey quintet took on the Sunset Strip juggernauts (Crue, Poison, GNR, etc.) and held their own. Armed with such hits as "Youth Gone Wild," "18 and Life" and "I Remember You," Skid Row soon commanded the airwaves and ruled over the wild, headbanging youth of the free world. Certainly, circa 1989, you couldn't scan the magazine section of your local grocery store without seeing a few pictures of Sebastian Bach reflecting off the covers of Circus, Hit Parader, Metal Edge or RIP magazine. Skid Row at number one? Well, the collective view of the Metal Rules staff seemed to think so. It cannot be argued, however, that Skid Row, supported by some great riffs and an amazing voice, released one of the best albums of the late 80's!”

Most of the albums in my top 5 were not eligible for voting due to a narrow view of what glam metal is. However, the fact East Coast glam albums took numbers 1 and 2 (Cinderella’s Night Songs) over Ratt’s Out of The Cellar (#3) is just preposterous. This comes from a huge Skid Row fan. Without further adieu, let me see them BIG GUNS!

The first cut off the album is the tongue firmly planted in cheek, Big Guns. What do you learn from this? You learn that Bach will be screamin and howlin through the rest of the album. The riffs will be buzzsaw, nasty little bitches that don’t sound that good, but make you revel in the filth. Most importantly, the boys don’t take this too seriously. (AMEN!) This song always brings a smile to my face and has me singing along.

The chorus is just too good, “She has the BIG GUNS!//Pointed at my heart//She has my lovin reaching for the sky.” What on earth could he be talking about??? I have always wanted to play this song while a buxom lass was running about, but alas buxom lasses no longer listen to the METAL~!

Next up is the first song I ever heard from Skid Row, their metal anthem, Youth Gone Wild. First off, it features a “Woah” outro so the song has to at least be good. Overall, I think the riff could be more prominent. I fuckin love the drum fill signifying we are going into the chorus. Bach just absolutely owns this song and conveys the emotion of living on the street and fighting for their right to party.

Skid Row wins hands-down the award for the best pure power ballad with I Remember You. A perfect blend of power and sugar. It begins with the typical acoustic intro and Bach showing his range with a sweet melody. Before the band kicks in and the guitars blare, only to show restraint again before full-bore on the chorus. The chorus is urgent and catchy. You just have to hear it. As was typical in the late 80s, the best solo can be found on the power ballad. The bridge out of the solo (it was the 80s they had a bridge into the solo too, excess at its finest), which is what Skid Row excels at and loves and this song is a perfect example of this. Bach vocals on the lyrics of “I woke up to the sound of pouring rain. Washed away a dream of you. Nothing else could ever take you away. Because you will always be my dream come true. Oh my darling, I love you.” If that doesn’t moisten and drop some panties, I have no fuckin clue what will. Great finish, great song, definitely take a listen.

Ok, put away the tissue box, it is time to fuckin rock again with Piece of Me. Bach is sleezin in the city with his high heels on and looking pretty, but he is looking for a fight. That disparate juxtaposition (pretty & fighting) is what glam metal so interesting and vital. This is definitely the heaviest and toughest song on the album that is a portent of things to come. Slave to the Grind, the follow-up is a heavy metal masterpiece, but it was NOT a glam metal album, it is a straight-up heavy metal album (it would be the first heavy metal album to debut at number one). I love that sound of the lead guitar on this one coupled with the pounding of the drums I just want to bang the shit outta my brain. The whole song sounds like it is on the verge of collapse with all the belligerent energy and Bach’s strained, but powerful vocals are on full display.

We wrap this review with the last of the hits from this album, the power ballad: 18 & Life. This one deals with subject matter of a troubled teen that makes one bad mistake and ends up behind for the rest of his life. The music reflects the change in usual subject matter of power ballads being a bit darker, a bit heavier, and ominous. There are cool hooks you continue to learn on each listen. Like just now as Bach says “Ricky is the Wild One” the lead guitar does a screech. Just cool little things like that. Bach sounds vibrant preaching the travails of Ricky with his heart of stone. It is a cool little story in genre that is bereft of songs with stories.

Listening to this album again, I am bumming that missed out on my chance to see Seb Bach in concert in Detroit. But with Van Halen tickets at $100 (that was for the cheap seats!) you have to make some sacrifices. For those who don’t know Bach and Skid Row have broken up. Bach has a solo band and then there is Skid Row. I definitely recommend the nest album, Slave to the Grind, who those who like their metal a bit heavier and faster.

From the youngest album to the oldest album to make the top ten, we are taking the way-back machine. Here is Skid Row’s Sweet Little Sister to play us out.

Posted by Martin Boulevard at 9:47 AM